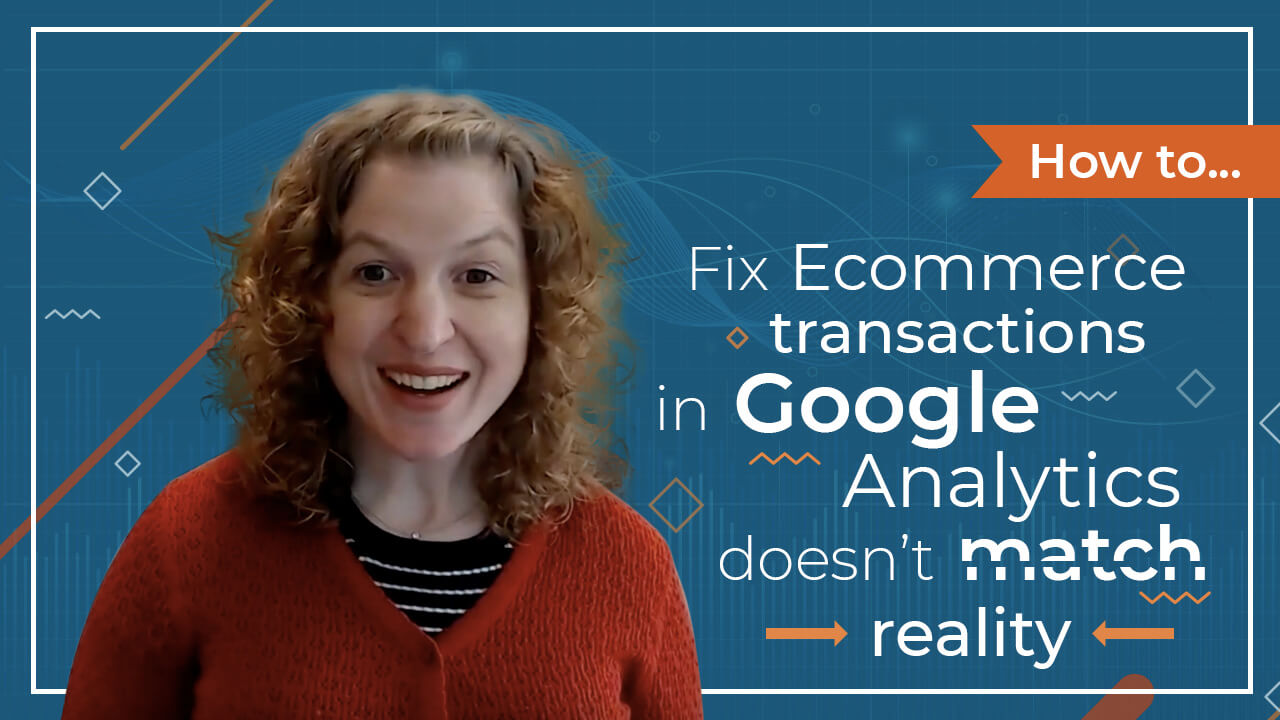 This week I came across a really unusual situation where the ecommerce transactions being stored in Google Analytics were very different from the real transaction data from the back-end of the (Magento) store.

All up, 50% of revenue was missing from Google Analytics, even though some was “extra”.

It all seems very random and since in this instance I am not personally setting up this data I have had to refer it to the client’s developer for further investigation. The website code is sending the ecommerce transactions directly to Google Analytics rather than Google Tag Manager so I’m yet to learn exactly the cause.

The biggest issue here is the fact that it is really impossible to optimise advertising or CRO attempts if your transactions are not being correctly recorded. If you’re doing it right, Digital Advertising will always become optimised for what is leading to transactions, so if you are not recording transactions correctly you’ll get some really weird results.

So this week I came across a really unusual situation where the e-commerce transaction data in Google Analytics which was also being passed through to Google Ads did not match the back end data about what the real transactions were and were not on the website. Now, I haven’t personally come across this before. Usually, if a website is sending e-commerce data through to Google Analytics the developers have normally set it up so that it is passing the correct information through.

So my preference is definitely the Tag Manager version. But in any case, eventually what happens is the information gets through to Google Analytics about what transactions were made on your website, what products got into checkout stage etcetera. And when they’re at the transaction part of the process you would usually have a transaction ID, a price, a quantity, the product name, a SKU which is a product ID and you might have other accompanying information such as the brand or a variation of what colour it is or something like that. You would also have whether shipping is applicable and various information regarding the shipping.

So this week I came across a really unusual situation though where this particular client was — they found that actually in Google Analytics only about half as much revenue was showing up in Google Analytics compared to what was showing up in their back end. Now, they were using Magento number one and in Magento two there are some good plugins available so it doesn’t tend to be such a problem for Magento two. But in Magento one, there are no really good plugins for the e-commerce transactions and so a lot of developers are setting that up themselves.

So this is a real problem because what ended up happening was they ended up being about half as many transactions showing up in Google Analytics as what was in Google — sorry, that’s what was in the back end. And the Google Ads are generally in an e-commerce situation, are generally being driven as a return on ad spend which requires a correct transaction value to be passed into Google Ads. You need to be able to attribute whether a particular transaction came from a paid advertising campaign or whether it came from organic campaign etcetera but also you need to be able to identify whether the advertising that you’re doing is effective. And the way that you measure if it’s effective or not is whether it turned into a transaction or an add to cart or something which is in the sales funnel.

So this is really worrying that the e-commerce data wasn’t being passed all the way through to Google Analytics and ultimately to Google Ads. Now, if you want to prevent this from happening in your situation, I do recommend doing a very quick and easy check to make sure that your Google Analytics or your Google Ads numbers match up to what’s really happening in your back end.

So this is what we ended up doing to check in their case we took the last month, last full month of data, so in this case, we took February and we set it up from the 1st of February until the end of February, excuse me. What do we have in Google Analytics? So there’s an e-commerce report that you can pull up in Google Analytics and it’s down in the e-commerce — sorry it’s down actually on the conversions and the e-commerce and you can pick either the overview or you can pick one of the detailed listings. It doesn’t really matter and, and you can see what the total number was for e-commerce. You can then go into your back end system which is processing the actual payments and you can pull the same month of data from your back end system and just make sure the numbers add up.

What you might find is the Google Analytics one might be ten percent less if you’re in Australia or if you’re in a country that has VAT or some other GST component and that’s because typically the process put into Google Analytics are tax-free so that then if you’re shipping overseas and you strip the tax depending on which country you send to then you won’t have to worry about do the numbers match up.

So you’ll probably find that in Google Analytics you have tax-free numbers or if you only ship within the same country they might include tax so you would need to check that. But if the numbers match tax accepting then you’re good. If you have numbers that don’t match then you’ll want to investigate why for sure. It is important like I said for Google Ads that, and other paid campaigns that you can actually measure the attribution of your transactions.

So the next thing that you would want to do is in Google Analytics you can go into the e-commerce product purchase — well, sorry I can’t remember exactly the name of the report but there’s a, a product, a product report under the e-commerce reports. So it’s under conversions, e-commerce and then something like product sales and like that. And you want to go to that report and download that one for the full month. So first, you need to pick in the date, pick up the date range then you need to increase the number of rows. Just increase it to 5,000 and then click export and it will export it into a CSV file. Then if you can get your back end files and you can also export that, then you can go down line by line and see where they don’t match.

Alright, well hopefully that’s helpful and I really hope that this situation doesn’t happen to you but if you’re running an e-commerce store, the chances are that you’ve had some kind of problems with your e-commerce analytics at some point during your journey. And if you would like to ask me any questions that you’d like me to answer in this format, you can do so by joining my newsletter and you can do that by going to my website at www.thequantifiedweb.com.

Alright, have a wonderful day. Bye!

If you’re running an ecommerce business or one in which the sales are taking place on your website, I recommend you periodically check your Google Analytics ecommerce results against your real ecommerce results (from your back end).

With this client, the issue had been occurring for years and no-one had picked it up until I discovered the issue in an audit.

To compare the two, take one full month of back-end transaction data and compare it to the same full month of date range in Google Analytics. Ideally, the two revenue numbers will match within 5%. If the two don’t match, the first thing to check is the tax. Google Analytics data is usually shown tax-excluded, especially if you sell across multiple tax jurisdictions. If your numbers are still not adding up you can go through line by line across a date range and see where the problems are occurring.

I hope this isn’t a problem you are running into, but if you ever experience issues like this one, please reach out as you may need some more specialised help to get to the bottom of it.