[Video] How To Set Up Smarter Remarketing Audiences for Google Ads 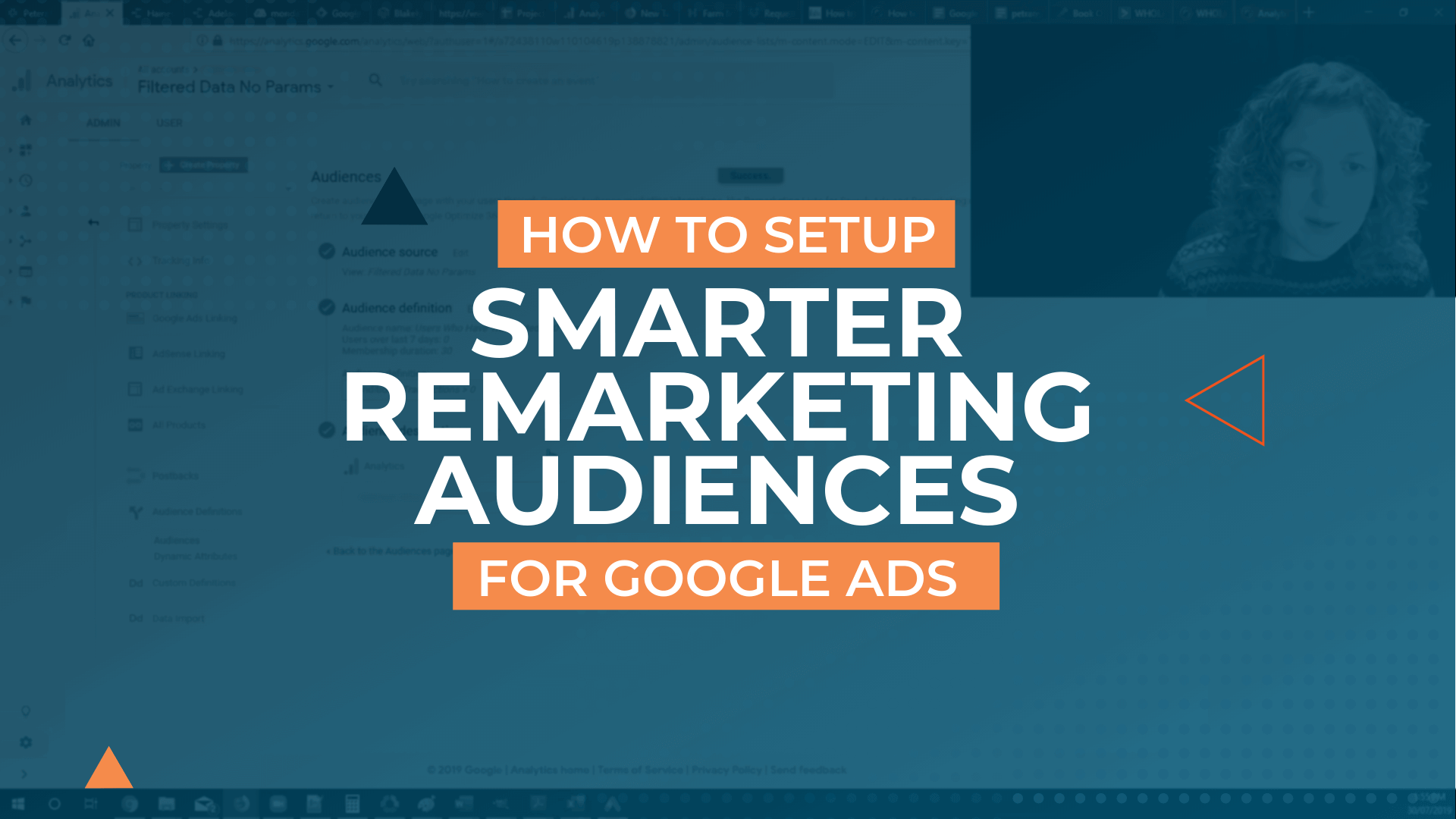 Today’s video is about setting up remarketing audiences in Google Analytics, in order to publish them to Google Ads.

I like to set up remarketing audiences based on recency and engagement. I also like to always have a maximum duration remarketing list so that users don’t drop off your lists after a short time.

Watch this video to see how to set them up!


Hi! I thought I’d just go through some of my favorite remarketing audiences.

Alright, so at the moment we don’t — yeah we don’t have Google Ads in there so I’m just setting it up so they can at least publish within Analytics. So you need to actually enable Audience destinations before you can start creating them and it automatically creates one called All Users and it gives you the last 30 days worth of users. But I’m going to help you set up some other ones.

So the first one we’re going to do is a long-term audience. And Google Analytics lets you set up an audience which has a maximum of 540 days. So I recommend creating one of those because that way you don’t lose your, you don’t lose your audiences after 30 days. If you, if you don’t set up the audience then those people are gone. So you might as well just set up a larger one.

So you can set it up so that anyone who comes to your website — actually you don’t need to do that. So you can — I just cancelled the conditions. You can basically change this Membership duration up to 540 days and that will allow — so we’ll just do one, we’ll call it All Users – 540 days. Alright, so that’s the first one.

Now we can improve on this though because this one here, it’s just taking everyone that came to the website and I like to be a little bit smarter than that. There’s — you don’t have to worry about having an extra audience in hand. There are no limits in terms of a unilateral one audience or anything like that. So I suggest making one – another one that’s slightly smarter.

Now we’ll go back to Audiences and what I mean by smarter is instead of just all the users over 540 days, we’re going to just take the ones who actually engaged on the website in some way. Now, this particular client doesn’t have an audience engagement report with me. When I set up an audience engagement report, I actually set up some, some code which actually tracks mouse movement and scrolling and if someone moves their mouse or scrolls within 15 seconds, it counts towards engagement. And I like to actually check whether people are engaging. And then if they are engaging, then they get added to this list because you don’t want to include people that have come to the website and immediately worked out that it’s not for them and then left. What’s the point in remarketing to those people?

So but this particular client doesn’t have that setup. So if, if they did have that setup, I would actually do one which was All Users engaged over 540 days and the way that I would do that is – I would set up a goal that had whether they engaged or not. So if they triggered off the page engagement event that we sent as part of that audience engagement report, then it would trigger off a goal and that goal would say that they engaged and would create an audience of people who had engaged on that goal over the 540 days.

But you can still do something very, very similar even if you don’t have the engagement set up with Google Tag Manager. So this particular client doesn’t and that’s fine. What we can do is we can create a new one. And if we go to Behavior, we can, well we can either do one based on Session Duration – so if the Session Duration is longer than 30 seconds or so, the chances are that they’ve been engaging during that time – or we can also do one based on the number of pages they viewed.

So we’ve got — in this case actually we’ve got a goal for If they have visited three or more pages, but that’s probably a bit too many pages. Just thinking of — it might be on Sequences. No, just thinking it might be — it would be under Conditions. I don’t normally do it this way because usually, I would actually do the Engagement Pageviews. Here we go. So if someone — alright, so if we included every, all the sessions that had pageviews larger than one, then we would know that they had looked at at least one page. So they’re looking at more than one page. We can have an audience of people like that.

So there are two options here. You can choose per user or you can choose per session. It won’t make, it won’t make a huge amount of difference really because what we’re trying to do is filter out the people that have just immediately bounced. So if you do per session it’s going to count — it might count someone who bounced but then came back and did 30 seconds. So we’ll just go with per user and then click Apply.

Alright, now with this one here, again we can do a 540 day one, but now it’s introduced this thing called Lookback days because we’re trying to apply Behavior. So if you’re doing a long term one of 540 days, I would normally recommend a Lookback days of 30.

Alright, so I normally recommend labeling your audiences by how large, how long those people stay on the audience for because you can essentially create the same audience but in a shorter time frame and then you can, you can basically stagger them in Google Ads so you might say if they’ve ever been in your audience at all, give them a 10 percent boost. But then if they’ve done so recently, then give them another 20, 30, 40 percent in terms of bid adjustment.

Alright, so we’ve now got those audiences. Now being slightly vague on some of these and I said these were my favorite audiences, but I’m kind of lying because this one here that’s the first time I’ve ever done that. Normally, I have that page engagement goal that I set up myself but this particular client doesn’t have Google Tag Manager set up so we’re just doing it differently. Either one will work.

Now, so we’ve done the 540-day ones. Now another one that I recommend doing is finding the short-term users. So for that, I’m going to do a 30-day audience. Now again, we can do All Users but I really do prefer to just focus on users who have engaged in some way. Behavior, Session Duration per user Greater than 30. So before you would have seen a little, I had to just quickly look this up. So it is based on seconds, not minutes or milliseconds. So that’s an important thing. It doesn’t have units on here, unfortunately, which is a bit, a little bit frustrating, but just go by seconds.

Alright, so we want more than 30 seconds but this time we’re going to do a Membership duration of 30 days and for 30 days I suggest a Lookback of 7 days and then basically once the 30 days are up, they’ll fall off this list but they’ll stay on the long-term lists. So, Users Who Have Spent.

But the last one that I want to show you is the transactions. Now we want to actually exclude people who have recently transacted because that prevents you from like — once you start putting bid adjustments up on people who have recently come to your website, those people are more likely to see your ads. So if they’ve recently purchased from you, probably want to ease back a bit.

So, what we do is we end up having an exclude audience of people who have purchased recently or alternatively you can do a bid adjustment down for people that have purchased recently. So, there’s actually an option for that under Audience definition, those users here completed a transaction and so that gives you this one here, Transactions greater than zero and for that one, I want to do a Membership duration of 30 days.

Now, in this particular case, it’s got users over the last seven days of zero. That’s just because the client doesn’t yet have the plugin on her website for passing the transactions to Google Analytics. We’re about to fix that and you should see if your website is stable and has people purchasing, you should actually see more than zero here in terms of users over the last seven days if you’ve made transactions at that time. If it says zero there might be something broken with your audience. So, but in this case, in this case, it is broken but as soon as I fix the Google Analytics e-commerce, it will just automatically pick them up.

Alright, well that’s just a few basic audiences. I do recommend staying away from the default in that. First of all, you do want to have a long-term one irrespective of whether you go with my idea or not of checking if they’re actually engaged because — well I’ve got two here. I’ve got the All Users – 540 days and Users Who Spent at Least 30 seconds on the website.

So whether you do that or not or whether you just go off All Users, do stick with one that’s 540 days that you don’t lose your remarketing lists after the 30 days that comes by default. And I do definitely recommend having a short-term one as well and also a transaction one so that you do have a little bit more adjustments that you can make in your Google Ads rather than just marketing to one list and treating everyone equally. If they have been coming more recently than they are definitely a better prospect in my mind.

Okay, well hopefully I haven’t just been rambling too much but I, I hope you have a wonderful day and I hope that’s been helpful. See you later.