by Petra Manos | Putting it All Together, Video | 0 comments 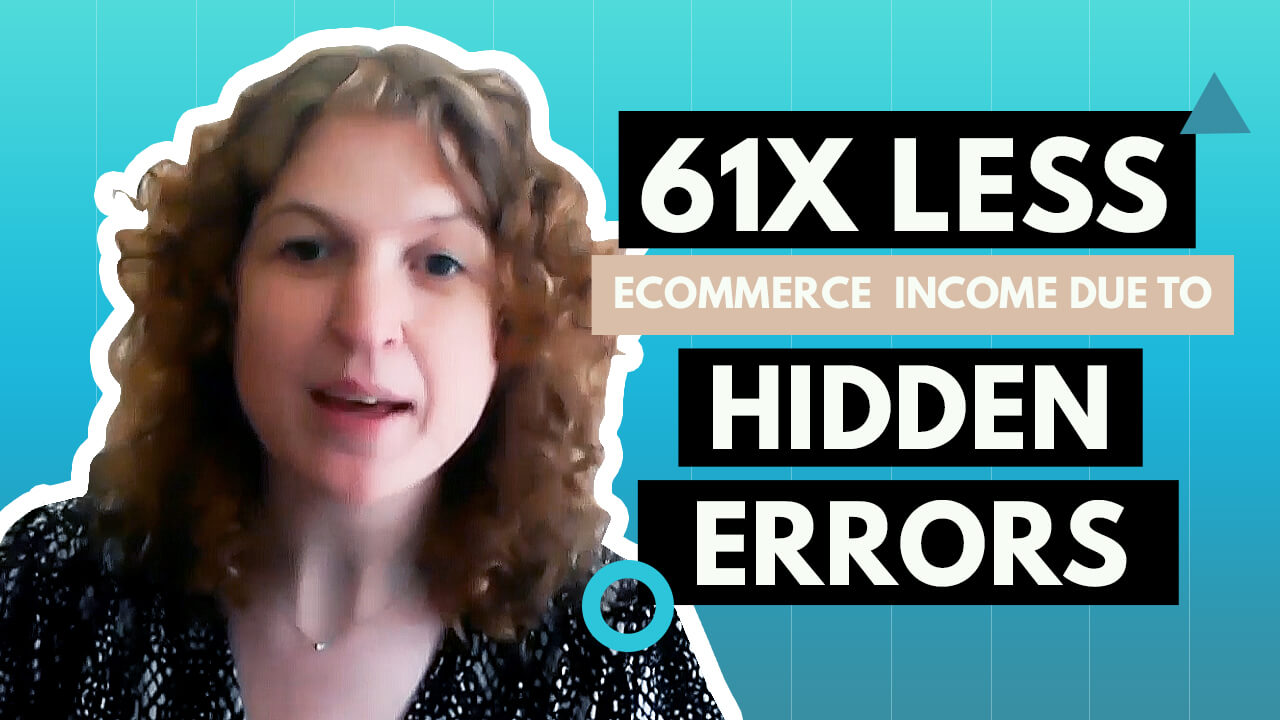 Today’s post is relevant for ecommerce and SAAS websites, or any other website where clients could experience error messages leading up to a conversion.

In a recent video, I talked about how we were able to identify error messages that were appearing on a client’s website and then we were able to see which errors were having a large impact on sales. I find seeing a picture of data is a lot easier than just talking about it, so I created a graph that plots all the error messages out against revenue.

What we found was that errors at different stages of the buying cycle had different impact on sales.

In this case, an error message that is occurring late in the piece (probably something like an invalid credit card number) isn’t having a large impact on sales.

On the other hand, an error message that was being seen by more than 300 people resulted in a very poor sales outcome. The difference between the two error messages was 61X revenue!

We want to avoid having scenarios that are experienced by a large number of people and that lead to low revenue.

So in a recent video, I talked about how we were able to identify error messages and how it impacted the revenue on an e-commerce website. I just wanted to show you an example of that in a graphical form because when it comes to data, sometimes seeing a picture is a lot easier than talking about it. This is actually a really useful one for any e-commerce store – basically, anyone who takes payments online – or SAAS that may have error messages that could impact their users’ experience online.

So I’m just going to share my screen. Here we go.

Okay, now what I have done here — so I’ve just drafted up a little, just a little graph that shows how different error messages can impact sales. In this case, it doesn’t really matter what the individual error message is up, I wanted to show you how error messages of different parts of the buying cycle can have different impacts on the sale.

So in this particular case, each sale had an average value of about three hundred and eighty dollars ($380). So we can see that this error message is not really impacting whether people decide to buy or not. It’s happening very late in the piece and the average spend of a user who sees that error and you might see on that too it’s actually three hundred and eighty-two dollars ($382).

So that particular error isn’t stopping anybody in their tracks although it’s still notable that a hundred and forty people over the period of time saw that particular error. You may find that that will be something like a credit card. They typed in the wrong number in the credit card for example when it comes up with an error that says, “Please retype your credit card.” If you see something like that, it’s very unlikely that will stop someone in their tracks if they’re already decided that they’re going to buy.

But some error messages, if they’re early in the buying cycle will have an extremely detrimental impact on sales. So if you look at this one, for example, this particular error the average spend of a user who sees this error is six dollars twenty-six cents ($6.26) and this one was three hundred eighty-two sixty-nine ($382.69). So let’s — here’s one I prepared earlier. Will just clear that out. So three hundred and eighty-two point six nine divided by six point two six. Sixty-one times.

So essentially if someone sees this error message at this part of the buying cycle, so it’s probably when they already have their credit card out from some point they’ve just made a typo in there are sixty times, sixty-one times more likely to or spending sixty times more money than people who are seeing this error which is very early in the buying cycle.

So this particular error, and this is a problem with this error because more than three hundred people have seen the error. So it says three hundred eight people got this error and the reason why the spot is quite small, I’ve got these spots, they’re sized based on how much revenue was obtained across all the sessions in which that error occurred and you can see this one’s quite small because it wasn’t a lot of revenue.

So this particular error really stops people in their tracks and about three, three hundred and eight people saw them over the time period which wasn’t very good at all. This kind of errors, the ones that are really detrimental are things like if you have a form on your website which is essential for moving to a later stage or if you have particular products and they’re getting error messages trying to view the products or type in the form or interacting at a browsing stage, that it’s very likely that your users will just leave the website and go buy from somewhere else. So we don’t want to be having too many.

So if you plot out all of the error messages that users can see on your website and you plot it against revenue then you will start to see clear as day which messages are causing a real problem and which ones don’t. So which ones are not creating the problem. Now, the ones that — the way that you would implement this is if, it depends on how the error messages are being displayed on your website.

So in the case of this particular website and the error message was being stored as a javascript variable and what we were able to do is whenever there was information in that javascript variable, we were able to pull that out and pass it through to Google Analytics. That turned out straight quite — let me say that again, that turned out fairly straightforward doing it that way but it really depends on how it’s implemented on your website as to how you will get the value of the errors.

But now after seeing this kind of feedback, the client with these errors on the website has now sent their developer team off to look at the different errors. This is because essentially if people are getting these kinds of errors – and this one there’s like two hundred and seventy-seven people seeing this error – although it’s not quite as bad, but when people are seeing especially these early errors, they are not buying from the website in general. So that is money that could have been in their pockets that is now in someone else’s pockets. Certainly.

Alright, well hopefully that gives you a little bit of an overview of how you can use error messages or how you can see what kind of error messages are making an impact on your sales or not and please let me know any feedback that you’ve got that that’ll be very helpful. Go back to me.

Well, I hope that that was informative. Do let me know if you come up with different ways of collecting the error messages that are happening on your website. These are very insightful because they’re usually hidden to you as the owner and I’m really keen to hear how you end up using this information.

Alright, have a great day. Bye!


If your users are getting errors when they are trying to view products, fill in forms, download files, interact and/or generally shop on your website and they have not committed to a purchase yet, then it is very likely that they will hop off your website and go somewhere else.

Hopefully, your website is generally error-free, but if you’re wondering what might be causing your visitors to leave without buying then please contact me for a discovery call.